Welcome back to The California Travel Diaries: San Francisco! This was the first stop on my Californian Summer Road Trip that I went on in June 2018. I had so much to tell you about in my previous post that I decided to split it up for fear of you going cross-eyed from reading too much. So check out my first post to understand the basics of how I planned this stop and continue reading below for my itinerary!

We arrived around 1pm in San Francisco and luckily checked into the air b-n-b early to drop off our bags and begin exploring! We were itching to go and discover San Francisco and decided to start off nearby to where we were staying. We were based very near to Golden Gate Park which is full of museums and trails. Unfortunately we didn’t get the chance to dive into this as we were only in San Fran for a limited amount of time. I can’t personally recommend anything specific there but I have heard it’s a lot of fun! Instead we decided to take a short wander along the edge of the park leading us to Ocean Beach Fire Pits. Prior to this trip my experience of beach life included the English seaside, where you eat fish and chips and wander along pebble beaches braving only to dip your toes in. You would be mad to strip down and go for a swim (prior to the crazy England Summer heatwave!) Or I’ve experienced beach days in the likes of Cyprus and Spain where your pale British self spends all year waiting for a week’s worth of Vitamin D. On this type of holiday you make memories on jet-skis, crazy watersports and fight for sunloungers at the hotel pool at 6am. If you are lucky you will get a tan at these beaches rather than a typical English sunburn at Brighton Beach (even though I love myself a bit of Brighton!)

When we arrived at our first Californian beach a highlight reel of The OC played through my head…cliché I know. But before me suddenly “beach life” had a whole new meaning to my past experiences. It was a practically empty beach apart from a few fit runners and Californians walking by the ocean as the tide came in. To see a beach as beautiful as this one that also appeared so untouched was a sure change to what I knew. No tacky tourist shops and no McDonald’s in sight – it was simply serene… even if it was only a cool 18 degrees celsius. As I stood on the beach gazing upon the crashing waves, the cool breeze blew through my hair; so much so that I had to tie it up! Seeing a quiet but beautiful neighbourhood located only a stones throwaway to the beach suggested that the dream of having a good job and a nice place to live and good (albeit breezy) weather really can be a reality all at once. Back home in the U.K. despite many seaside towns having a relaxed but exciting charm about them, they tend to be a bit grittier in relation to the rest of the country. Job prospects are also often limited unless you are willing to travel and commute throughout the week to the big smoke that is London. This appears to be the very opposite for the affluent towns that surround the beaches in the Golden State. It was the first of many occasions on my trip I stated “I think we are moving here”. This first trip to the beach was also one of my happiest memories in California.

After a few excited squeals and celebratory jumps that we were in fact in California, we walked to Seals Rock. This is as exactly as it sounds- there are literally a bunch of seals chilling happily on a huge rock. This was such a novelty and something which we then found out was quite common to witness throughout California. I honestly never considered seals or sea lions as American creatures but more Australian for some reason. I think it’s because it felt like I was watching the live rendition of that scene in Finding Nemo where the seals are pushing each other off the rocks (and yes they do try to do that!) The Seal Rocks are also located by Camera Obscura, which you can pay to go into but I was happy enough just to take a photo of the (comically large) camera that dates back to 1946 and continue exploring.

Seal Rocks in the distance

Another shot of Seals Rock in the San Franciscan Sun- Those little black blobs are the infamous seals! 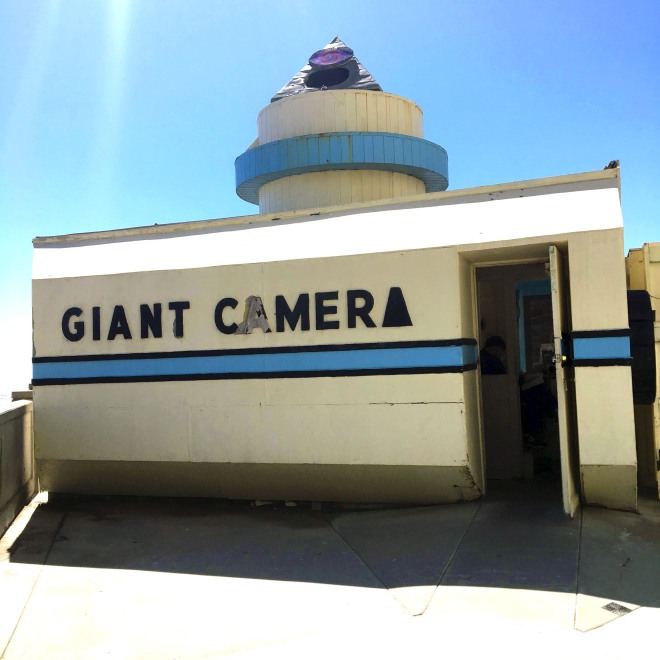 We then continued to walk along onto Lands End and followed the Eagle Trail. As we were talking and walking along the trail, already expressing our love for the city amongst more runners (Californian’s do love their fitness) and dog walkers, all of a sudden there she was. Arising from the tall trees and winding trails, the hills beautifully framed The Golden Gate Bridge. This moment was another highlight throughout my whole trip as we did not intend to go and seek out “seeing” the Golden Gate Bridge until Day 2. We were stunned as it was an exceptionally clear afternoon and out of nowhere we got to see the iconic landmark of this city. There is something quite special about accidently stumbling upon such a renowned Californian landscape. It was also a bonus as we didn’t have to battle any crowds to get a decent shot either!

As we hiked along the trail the only downside was that we didn’t realise that despite the cool temperature of around 18-21 degrees Celsius, when mixed with the blowing winds, you can actually get wind burn! At this early stage of our travels we didn’t put on any SPF which resulted in burnt foreheads. It’s safe to say that I now look at my new cap that pays homage to the city in a whole new way.

The view from Lands End on the Eagle Trail

After our days hiking and exploring this small area of San Francisco, our hungry tummy’s were keen to finally try some long awaited Mexican food. We found a local restaurant rated decently on Yelp (the American answer to TripAdvisor) called Tommy’s Mexican on 5929 Geary Blvd. We enjoyed a pitcher of margarita and two combo meals (we couldn’t decide). Here we also met a fellow Brit and his Californian friend who gave us our first taste (excuse the pun) of American friendliness. Overall we enjoyed a delicious dinner with the spiciest salsa I have ever tasted, but it was our most expensive meal throughout the whole trip. Nonetheless we were prepared that the prices would be higher here and that whole pitcher of margarita probably had something to do with it (woops)…

I also recommend that if you are in the area to stop at Simple Pleasures Café on 3434 Balboa St. It is a cute hipster café/bar where you can equally enjoy a nice beer or chai latte. It has a family vibe to it with photos of the local community proudly displayed and the service is very friendly. You can also bring along a book to read or your laptop to work on and you definitely won’t be out of place. For a large city like San Francisco, it’s nice to see that small run businesses like this are still doing well!

At the end of our first day in San Francisco I think it’s safe to say that love at first sight really does exist.

What’s In My Travel Bag